Report from Camp Minnesota's First Camp of the Season - Lake of the Woods Fishing Camps!

Our group of 16 was at Border View Lodge. Awesome lodging! Water Temp had dropped nearly 10 degrees over the cold weekend that shut down the walleye bite. But the Lord is good and fishing came on as it slowly re-warmed. Weather was sunny (no clouds and only light winds) Slow on Monday afternoon but we caught plenty of fish for dinner and a few take homes between 2 and 4:30 pm. It got better on Tuesday in four- mile bay and it was so nice that our group headed out to Bridges and the Gardens with several launches (about a 20 mile run) .

Wednesday was very calm (fishing in T shirts and wishing we had on shorts). The fishing was hot with many large fish being caught. The big fish for the trip was 30".  Boats did better when they were moving. The hot jig that caught a lot of large fish was a 1/2 ounce chartreuse. We seemed to do equally well with live rainbows or frozen shiners.

Devotions, worship, communion, and evening games of "Cancellation Hearts" rounded out a great experience! Everyone had nice limits of WE (many 19's} and Sauger (many 15 plus). We did not catch any Sturgeon or Elpout this year.  One Northern. However, a very large muskie surfaced with a small walleye in his mouth (I caught the little walleye and the muskie hit it on the way up).

The "Largest Walleye Award" went to Tom Yeager of Park UMC in Brainerd. We did not count and track the fish, but everyone was all smiles!  All large fish were caught and released. We encourage CPR (Catch,Photo, Release). 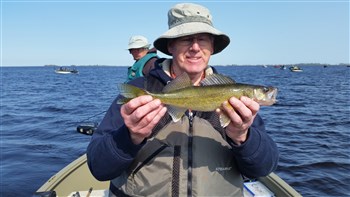 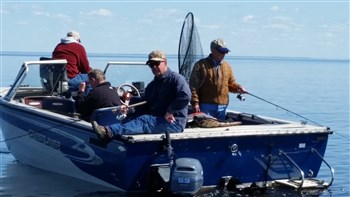 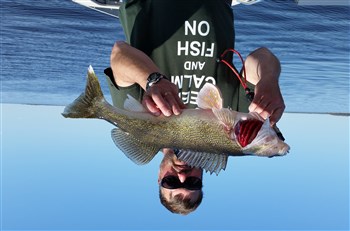 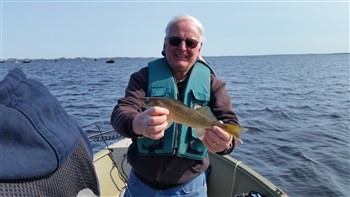 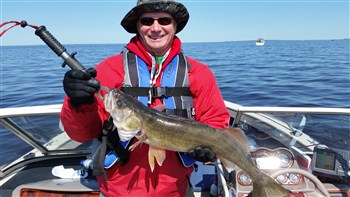 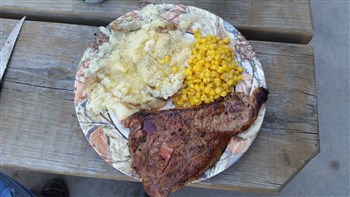